Gone are the days when the Captain Ahabs of the world hunted whales to near-extinction. While harpoon fishing isn’t as popular as it once was, there has been a resurgence in the popularity of spearfishing. Done correctly, spearfishing can be a more efficient, humane, and eco-friendly method of catching fish than angling.

Spearfishing is exactly what it sounds like: fishing with a spear. Modern spearfishing is usually done with a polespear or a speargun, and most spearfishing equipment is meant to be used underwater, not on land.

Spearfishing is a highly versatile sport. You can spearfish while freediving, or decked out in a full-body wetsuit with a 30-pound scuba tank strapped to your back. You can use as little or as much equipment as you'd like.

We recommend a two-piece over a three-piece collapsible polespear because are more rigid. You don’t want a polespear that flexes excessively because it will throw off your aim when you spear your target.

The paralyzer or three-prong spear is a very popular spear tip, and it’s commonly used to catch small- to medium-sized fish, such as lionfish.

How to Use a Polespear

Now it's time to grab the spear and load your polespear. Reach up the length of the pole with your dominant hand, stretching the elastic band as you do so.

As you do this, twist the spear one full turn (360 degrees). Wrapping the elastic band slightly around the pole reduces the amount of flex in the pole shaft. This is an especially important step if you have a two- or three-segmented pole. A pole that flexes excessively won’t shoot true.

Grab the spear with your dominant hand. As you pull on the elastic band, the tip of the spear will retract. You are now holding a live weapon.

Do not use a polespear outside of water. Shooting land targets is dangerous and can damage your spear.

Extend your shooting arm completely forward and lock your elbow. Hold the pole with only your shooting hand. Slowly loosen your grip on the pole. The spear tip will shoot out.

Polespears have some kickback, much like a gun. Overloading your spear will produce more kickback.

Advantages and Disadvantages of Polespear Fishing

Polespears are inexpensive, simple, and compact. They’re a very easy and cheap way to explore spearfishing if you don't want to commit to buying a speargun.

The biggest disadvantage of polespear fishing is the range of your weapon. The longest polespear is 10 feet long (3 meters). Anything longer would create too much flex in the pole.

If the range of a polespear sounds too limited, take a look at speargun fishing: 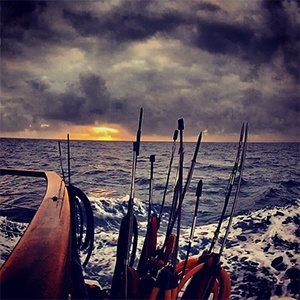 In an elastic speargun, a cord is usually attached to the end of the spear. When you pull the trigger, an elastic band slings the spear forward, and you reel in the fish with the cord.

A standard elastic-powered speargun consists of these parts:

The spear is thinner on elastic-powered guns than for pneumatic guns. Most speartips have a hook or locking mechanism so your prey doesn't slip off your spear.

A striped or brightly-colored reel line is usually connected to the end of the spear, to make recovery of your catch easier.

Loop the wishbone of the rubber band over the spear notch at the top of the speargun. Your gun is now loaded, and you're ready to catch some fish!

A standard trigger, much like that on a gun or a crossbow. Pull the trigger to shoot the spear.

A traditional hunter leaves bullet shells and toxic waste when they hunt. Firing ranges produce thousands of tons of toxic waste every year. Many of these bullet shell aren’t recycled and rust away in landfills.

Even the most cautious anglers often leave behind hooks, lines, and nets that leave fish in pain.

A cautious spearfisher doesn't leave behind any lines or hooks. Yes, spearfishing can get messy, but that's because many spearfishers hunt to eat or to reduce populations of invasive species, not to capture a photo of them holding an immaculate tuna.

That said, done ethically, traditional line fishing can be just as sustainable as spearfishing. Biodegradable fishing lines and hooks are readily available. No matter your preferred method of fishing, or your reason for fishing, it is an exciting and highly nuanced sport, and FishingVacations.com has resources to guide you every step of the way.

Loved this? Spread the word

What is Deep Sea Fishing?

Please log in again. The login page will open in a new tab. After logging in you can close it and return to this page.