Located in the beautiful midwestern United States, Wisconsin shares its coastline with not one, but two of the great lakes: Lake Michigan and Lake Superior. Some of the state’s largest bodies of water were carved out by water itself—most of the natural lakes in Wisconsin were carved out by glaciers millions of years ago. Many of Wisconsin’s residents have grown up around water their entire lives, and they’ve perfected the art of freshwater fishing.

Here are our top ten fishing spots in Wisconsin. 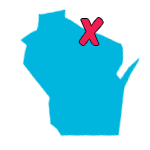 Big Saint Germain Lake really lives up to its name, sprawling over a whopping 1,622 acres. The water has a maximum depth of 42 feet, and an average depth of 21 feet. 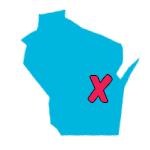 Two tributaries, the Wolf and the Fox Rivers, feed into the lake. Winnebago is a fantastic lake for catching walleye, and it is considered one of the top walleye fisheries in the U.S. You can also catch large quantities of bluegill, largemouth bass, muskie, perch, white bass, freshwater drum, northern pike, crappie, flathead catfish, smallmouth bass, and channel catfish. There is a lot of pressure on the lake, as it’s one of the most heavily fished lakes in Wisconsin, but its vast area makes up for it.

Lake Winnebago can be fished in all four seasons, including ice fishing in the winter. During the winter seasons, sauger and walleye are the most readily available fish. 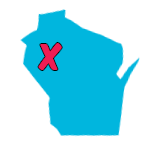 Species that you can catch in the Eau Claire Chain include muskie, northern pike, walleye, smallmouth bass, largemouth bass, crappie, bluegill, sunfish, and perch. If you’re looking for trout, try fishing in streams and small rivers. 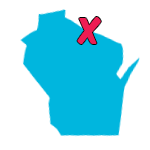 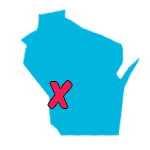 The Kickapoo River is often called the most crookedest river in the world. “Crookedest” is hardly a scientific term, but many of the best qualities of the Kickapoo River can’t be measured. Take a kayak or boat out onto the water and be amazed by the rock-covered cliffs along the riverbank. The Kickapoo has the highest paddler-to-mile ratio out of any river in the state of Wisconsin. Take one look at the beautiful cliffs and its calm green waters and you’ll see why!

You can catch brown trout, rainbow trout, brook trout, catfish, and carp at the Kickapoo River. At a lengthy 125 miles, the Kickapoo is the longest tributary of the Wisconsin River. The word Kickapoo is an Algonquin word meaning, “one who goes here, then there”. The Kickapoo River is meant to be enjoyed slowly, and this meandering river flows in all directions, turning you north, south, east, and west. 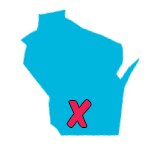 Black Earth Creek Fishery produces high quality brown, rainbow, and brook trout. The best time to go fishing is mornings and evenings—basically any time of the day that isn’t too bright and sunny, making the water too warm for trout to be actively biting.

We recommend fly fishing in this creek with a scud or nymph fly, though caddis and crane flies are often also effective. If you are unsure what color fly to use, flip over several brick-sized rocks in the stream and match the color of any insects you find. The South Valley Road downstream is one of the best stretches to fish at Black earth Creek. 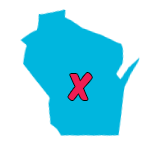 This lake is well-known among Wisconsin anglers for its trophy-sized walleye, northern pike, white bass, crappie, smallmouth bass, muskie, and yellow perch. Keep an eye out for diving flags on the water, and don’t stop your boat or cast your line too close. Big Green’s waters are clear, providing excellent water visibility for both anglers and scuba divers. 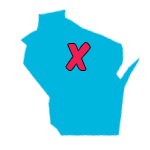 Shawano Lake is one of the most heavily fish lake in Wisconsin, and it’s no wonder why! Shawano offers some of the best walleye, largemouth bass, northern pike, walleye, and panfish fishing experiences in Northeastern Wisconsin. The lake is a managed warm water fishery, and it is well-kept and clean.

Northern pike is the most commonly caught species, but you will find plenty of panfish, largemouth bass, walleye, and the occasional musky or sturgeon. The lake stretches for 6,215 acres, and it has a maximum depth of 39.5 feet. This eutrophic lake has very high levels of aquatic plants, algae blooms, and nutrients, which provide a feeling of safety and shelter for the fish in Shawano Lake. The aquatic plants do sometimes prove to be a nuisance for anglers, getting caught on hooks and obstructing fishing, but the county of Shawano has taken active measures to clear out excessive algal blooms and nuisance aquatic plants. 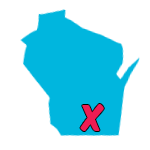 Pewaukee Lake is known for its abundant population of bluegill, northern pike, perch, and walleye, but the real prize that every angler is trying to catch at Pewaukee Lake is its giant musky. More 50-inch or larger musky have been caught in Pewaukee Lake than in any other lake in the state of Wisconsin!

The lake is used heavily for recreational water activities throughout the year. The best time of the year to go fishing is spring and fall, when boat traffic is low. Fish in the western basin for walleye, muskie, and smallmouth bass, and fish in the eastern basin if you’re looking for northern pike and largemouth bass. 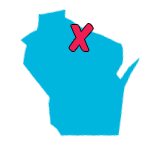 The Minocqua Chain is a popular vacation destination for anglers and their families, and the fishery produces excellent muskie, smallmouth bass, largemouth bass, bluegill, sunfish, crappie, yellow perch, pumpkinseed, and walleye. Due to the high level of development along the lake to attract business from tourists.

Due to the popularity of the Minocqua Chain, the water attracts jet skis and motorboats during the day. Many anglers wait until sunset or nighttime to begin fishing, after water traffic has died down.